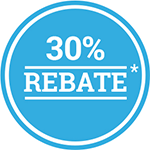 Use our service and we will give you an industry leading 30% rebate on your first years life insurance premiums. The average cashback amount is over $300. This is fully refundable if the policy is cancelled in the first 24 months. The rebate is paid after 3 months of premiums are paid.
100%
Kiwi Owned

Smart Insure is run by insurance brokers who have more than 25 years industry experience and is 100% New Zealand owned and operated.

Smart Insure provide ongoing support with a high level of service for assisting with all future claims. We are registered financial advisers and are regulated by the Financial Markets Authority and belong to a disputes resolution service.

What is Life Insurance

A cash lump sum payable on death or if the insured is terminally ill (i.e if they 12 months or less to live). You choose the amount of cover ranging which could be as low as $10,0000 or as high as $20,000,000 for example. The policy comes with some important benefits at no additional cost. You can also add one or more optional benefits for which you will pay an additional premium.

It covers any death, be it illness or injury. It also covers suicide after the policy has been in place for 13 months.

What It Doesn’t Cover

You may have some hazardous pursuits such as competitive sky diving where the insurance company may choose either not to cover this or impose a significant financial loading to cover it. This would on what you put on your application. The only other exclusions are based around serious “non disclosure” for example if you ticked no to cancer but you had had moles removed which were cancerous then later had a claim then the insurance company could not pay out a claim which is within its rights.

You are insured for life – there is no expiry age. The only exclusion is where the cause of death is suicide within the first thirteen months of the policy or its reinstatement.

Most companies will pay up to $10,000 on death as an immediate benefit, to cover funeral and other costs. This is deducted from the eventual payout.

If you are diagnosed as terminally ill and are likely to die within 12 months, you can apply for early payment of the sum insured.

You can increase your life cover without further medical evidence on the occurrence of certain events. These events include reaching certain ages, getting married, having children, taking out a mortgage, or your shareholding in a business increasing.

You can ‘inflation proof’ your cover by increasing it each year in line with inflation. Each year we will advise the level of indexation, which you can choose to accept or decline. There is no limit on the number of times you can decline this option.

Life Insurers – Who We Use

Here we at Smart Insure we think that clients should have the choice of all companies products however at the same time we will show an independent rating of any products that we recommend.

Current insurance companies we use are:

How Much Do You Need?

If you looked at the scenario that you died yesterday, what would be the financial impacts and what would you like to happen? Where would this money come from and do you need some insurance to cover this risk off?

How much does it cost?
Your premiums as based on your age, gender, occupation, smoking status and the level of insurance you require. Quotes given are based on standard premiums and can differ. Life Insurance is generally the cheapest benefit available and the other products are in most cases more expensive due to the higher probability that you will make a claim.
Can I cancel at any time?
Yes you can cancel your cover at any stage and you have a 14 day free look period when you first take out your cover.
What companies do you use?
Smart Insure uses 10 insurance companies which gives us the ability to not only get you the best premiums but the best quality products.
Do you offer discounted premiums?
Yes for using our online service we offer an industry leading 25% discount on your first year premiums which is offered to you as a rebate once the policy is in place.
Can I stop my premiums from going up each year?
Yes you can do by making your premiums level – this is available for some insurance products including Life Insurance and you pay more now to pay less in the future. Like the difference between a fixed and floating mortgage.
Do you provide advice on the levels of cover we should have?
The service offered by SmartInsure is more of a limited nature and is more restricted to establishing the best options for the cover types and amounts you choose. However if you want some advice surrounding this please contact us.
What happens when I make a claim?
You contact us in the first instance and we assist in getting you claim processed as quickly and smoothly as possible.
Get a FREE Life Insurance Quote

How Do I Apply?

So you have decided that you wish to apply for some life insurance, what’s the next step. We have the following options to make it easy for you:

The next step is to decide which option suits you best and then we can get the paperwork underway. We provide you with all the companies’ prices and then add a discount and then provide the 3rd party research so you can make your own informed decision and/or consult with one of our qualified expert insurance advisers if you have further questions.

Fill in the application form over the phone, online or the paper based application. This is then submitted to the insurance company, depending on what you are applying for and your medical information this may be it. If there is no further information needed all we need is a signed declaration page and a direct debit form filled out which you can do online and that is it.

Depending on what you are applying for or your medical history the following may occur:

Once all the information the insurance company requires is received they will come to an underwriting decision which will either be assessed as standard or with special conditions. Special conditions are either an increase in premium or an exclusion where something will not be covered under your insurance cover; i.e. a shoulder exclusion.

How Long Does It Take To get Into Place?

This really depends on whether we need to obtain your medical records and need any further medical tests done. Generally a life insurance policy which has no medical requirements or records needed can be in place within 2-3 days.